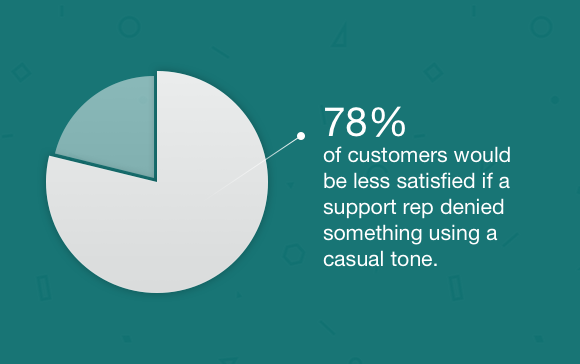 By the time your customers interact with support team members, they’ll very likely need help or will feel frustrated. Coaching your support team toward casual and friendly tone can usually soothe this frustration, but it often produces the opposite effect: negatively affecting customer satisfaction when the conversation ends.

Passing along thoughts and ideas to others is more than just the words that come out of our mouths. With every interaction, we piece together a puzzle using cues from tone of voice and body language alongside the words themselves. A long-standing study on emotional communication suggests that:

So what’s the takeaway here? Context is critical in conversation.

Be careful being casual

Friendly is good when helping frustrated customers through support teams, but representatives need to recognize when the conversation changes. SoftwareAdvice found that of those customers who have a preference in tone, 65% prefer a casual conversation… in most situations. If you’re wondering what the difference between tone and voice is, MailChimp offers a well-explained piece in their content style guide:

Voice is the vocabulary that you use on a daily basis: what you say. Tone is how you say it.

Customer support takes place mainly between two people who are communicating through some sort of medium. Phone calls and chat messages can’t explain the body language and tone of either person (except for the dreaded CAPS LOCK MESSAGES). In this lack of context, casual and friendly tones can seem flippant and dismissive in the wrong context. In that same SoftwareAdvice survey, 78% of respondents said they would be either moderately or much less satisfied if a support representative used a casual tone when denying a request.

Keeping casual for too long can have serious effects on customer satisfaction. Use clarity if a customer request can’t be fulfilled. If you truly can’t resolve the situation truly, switching to a formal tone and explaining the reasoning behind the decision will assure customers that you’re taking the situation seriously. It can be tough, but reacting to the conversation’s direction is crucial.