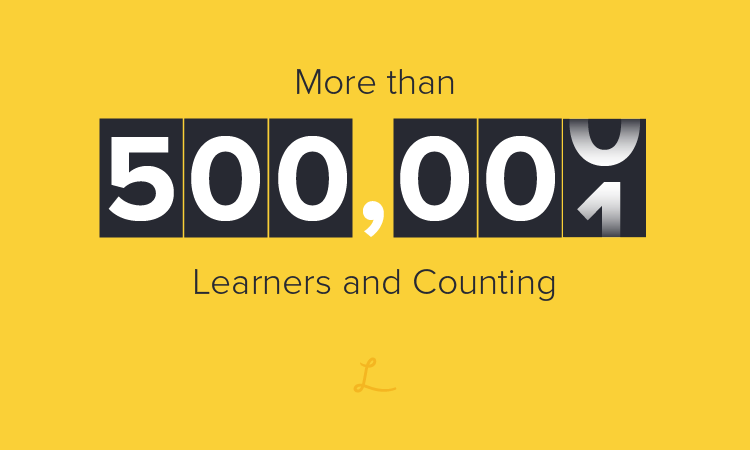 The Wednesday before Thanksgiving, several Lessonly employees stayed late, even though they were eager to join their families for the holiday weekend. They lingered a little while longer at the office because a monitor in our Sales Den read:

Back in August, Dev Team Engineer Jacob Smith developed a widget that tracks and updates a cumulative total of unique Learners using Lessonly. At the time, we noticed it sat at 430,000—about 70,000 Learners away from a half million. And in the months that followed, some of us calculated that rate of progress (well, that was me) and took educated guesses about when we’d hit the half-million milestone.

So when that counter neared the mark—and stubbornly hesitated for an apparent eternity a few tantalizing ticks shy—everyone chattered in excited expectation. And as that counter finally hit 500,000, the question arises: What’s the big deal? Why should such an arbitrary number matter?

Like most companies, sales numbers drive a lot of our quarterly goals, so it’s nice to see this counter ratchet up as we bring on new clients. But, just as important as the revenue implications of a growing Learner count, this metric also represents the growth of impact Lessonly is having on helping Learners do better work:

We’re keenly aware of how arbitrary this milestone is. But this running count represents an impact that’s so very tangible. This impact means more time, better productivity, increased working knowledge, and substantial cost savings for our customers.

And you can bet we’re working hard to hit a million.

Want to see how Lessonly’s team learning software can help increase your productivity by at least 22%. Take a tour and see for yourself.